Please read our user information before Posting. It will save much time and limit misunderstandings.

where the outcome of Combat was Life or Death.

by Bruce Lee, is the most effective guide toward Zen Combat known. It is highly recommended that you begin there and see what is useful inside. Then take what is useful and combine it with what you already know and go on from there.

Another excellent book is "Zen Combat" 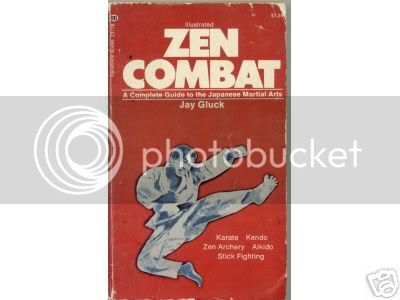 by Jay Gluck.(Available at Amazon Books) The practical applications are outweighed by the magnificent journey of this man. Very entertaining, there is something in it for everyone.


Zen Combat Community is about learning practical applications of dealing death blows to ones enemy and how to avoid the attacks of same in the process. It is for the Soldier on the Battlefield as well as the

What it is not for is the "Thug" or "Bully". We are not concerned with the misuse of this information by such people. Their very nature will not allow them the ability to understand the proper use of it. The writings here will be but the scrawl of an ape to them. Their attempt to use it against the innocent will result in their downfall. Trust this.

If you wish you can leave Comments or Questions.
However: If you would like to be admitted to this community please post your interpretation of this story:

during the summer of 1968 a young soldier who had been trained as a radio operator wondered what he would do if caught in an ambush. His duties required him to stay near the Lieutenant and keep in contact with the company headquarters.

Over and over again he imagined every single situation that he could...in his mind he saw the enemy from the front, the side, from above, from below, from all around. He saw himself reacting in all sorts of ways...holding fast to his Lieutenant, assisting the others in firing back, abandoning his radio after it had been made useless from being shot and joining the others in the fire fight and many others.
Still, many Months went by with no ambush...he went on leave, returned to duty and eventually stopped thinking about being ambushed altogether.

and to his amazement he reacted perfectly. He was not frightened, cool as a cucumber...he was able to react, perform his job, fire and maneuver with perfect ease. He survived without a scratch and received many compliments from his superiors.

When asked by a General, "To what do you attribute your success in Combat", he replied: " My drama teacher in High school always told me to learn my lines first...imagine an experience that was similer......then to try to forget them... and then when it came time for the play, we would be able to act naturally and without fear, deliver Our lines in a more natural state being able to let them come out on their own. It is called "Method Acting"

and slightly modified, that is what I used in Combat, Sir."

What do you think of his story and his explanation?